It has been a few months since we finished the original Expert in a Year challenge, and I’ve got the itch. I’m going to do another one – but this time I will learn from all the mistakes we made and it will be ten times better.

I (Sam Priestley) am going to spend the next year becoming awesome at Brazilian Jiu-Jitsu (BJJ). I don’t just want to become “good for someone who has just started”, in a years time I want to be straight up awesome. I am not sure yet what the overall target should be (how on earth do I determine awesomeness in Brazilian Jiu-Jitsu? I don’t want to be world class, but I want to be as good as possible), but for the time being I am setting this goal:

Starting from never having done any form of martial art before, I want to train months and finish in the top 3 in my category at the Brazilian Jiu-Jitsu English Open in seven months time on November 14th 2015.

Although I learnt a lot about ‘howto learn’ from my table tennis journey this will, in a lot of ways, be much harder. The original challenge was Ben’s brainchild and really didn’t take much thought or research on my behalf. I didn’t even have to leave the house, I would train in my kitchen and Ben would come round and coach me daily. Whenever I didn’t know something all I had to do was ask my permanently on-hand expert. I didn’t need to deal with the loneliness or the overwhelming confusion most beginners feel. I was hand held all the way from beginner to competence.

This time I am going it alone. I have no Ben. I will be training at a normal gym, entering competitions myself. Navigating the ins and outs of the UK Brazilian Jiu-Jitsu scene.

I will be taking responsibility for my own learning.

If you have never heard of Brazilian Jiu-Jitsu, well it’s pretty different to table tennis… it is a grappling based martial art that focuses on technique and leverage over raw power and strength.

And that’s pretty much all I know about it. As an outsider watching on it looks chaotic – and weirdly intimate – but after a few bouts you can start to see the technical aspects. It’s clear how much skill that the top practitioners have. 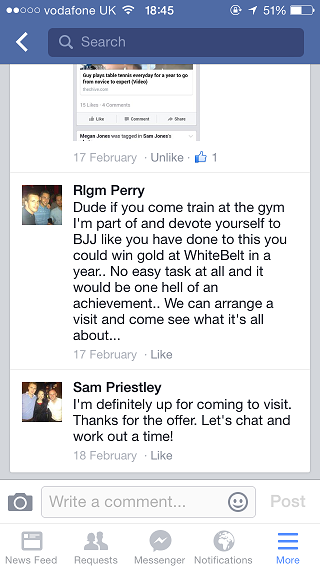 I had no idea what he is talking about, but winning gold sounds great. I did some research and the more I learnt the more excited I became. I have always wanted to learn a martial art so that part didn’t take much convincing – Brazilian Jiu-Jitsu seemed like a pretty good choice:

So I had the sport I want to do, but I had no idea what goal I should set. One target is to do at least 365 hours of training over the year, but I didn’t have a clue how to measure my progress. I joined a gym (the same one Rlgm invited me to) that met my two main criteria:

Urban Kings ticked both those boxes. it’s 20 minutes from my flat and has a full timetable. Most days there are two training sessions which means I can choose between lunchtime or evening depending on when I have to work: 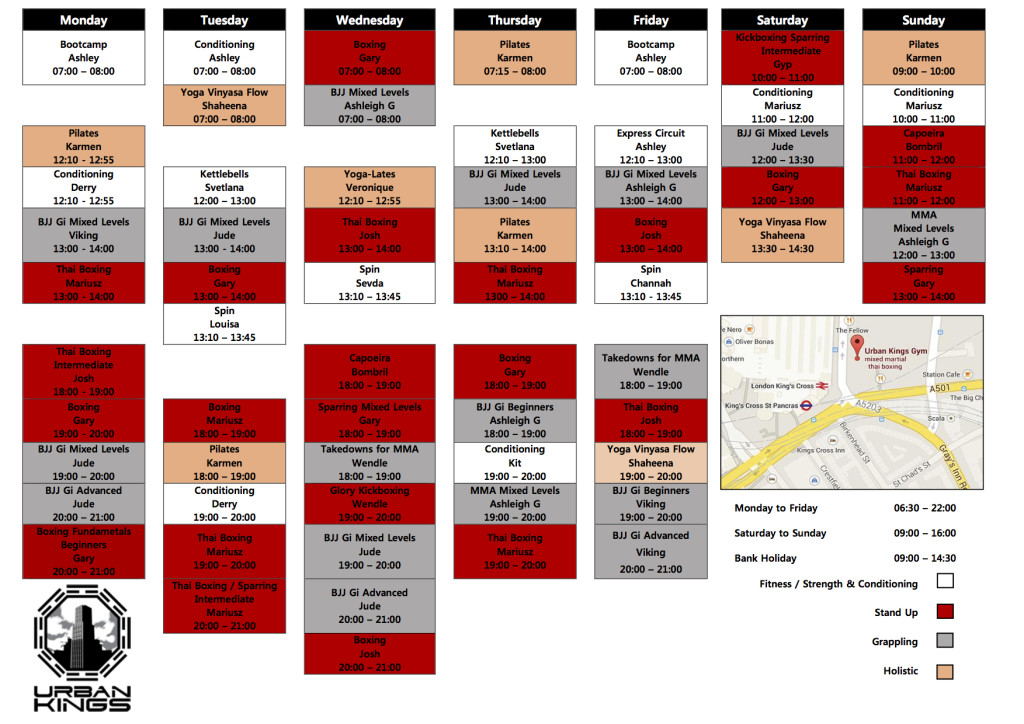 I signed up on Monday and yesterday I asked the resident black belt, Jude Samuel, what sort of challenge I should set. He suggested aiming for the English Open on the 14th November.

BJJ tournaments are categorised by  your weight, age and belt level. So I will most likely competing in the adult 70kg WhiteBelt tournament.

The problem is, I don’t yet know enough to asses how tough a target this is. From my research it sounds like “White Belt” competitions will be made up of competitors who are relatively new to the sport, anywhere from 1-2 years in. According to Wikipedia you need to have your white belt for at least a year before you can be promoted.

For lack of any better advice – and to get the ball rolling,  I’ve decided to set myself the target of placing in the top three at this tournament. Now I know that’s not quite a year (in fact it’s in seven months), but there are no big tournaments in exactly a year’s time and even if there was, doing well in one after a year is a lot less ambitious than doing it in seven months. If I manage that it would put in the top few white belts in the country.

If anyone has a good, challenging target for the full year, I’d love to hear from you.

The goal posts may change or there may be new ones added, but until I get a better understanding of BJJ and the tournament circuit I have a challenge, something to aim at and something to tell people about. Time to start the training…

To continue the ‘Expert in a Year’ brand, I will be dubbing this challenge ‘Bjj in a Year’. Similarly to the table tennis challenge I will update as I go through videos and blog posts. Look forward to my first video where I will most likely be getting my arse whooped…

I will also be keeping a daily real time diary which you can access here: