Welcome to the BJJ in a Year challenge.  On this page you can follow Sam Priestley‘s progress as he attempts to get as good as possible at Brazilian Jiu-Jitsu. Over to Sam.

Note – The year is now up and you can read my write up here.

Following the Expert in a Year model, I am going to improve as rapidly as possible by maximising the two parts of this equation:

I have gone into detail on how I plan to maximise both “Good Practise” and “Lots of Hours”, but in short I am going to train as close to everyday as possible with the aim of getting at least 365 hours of good quality mat time. Check out my live timesheet and live expenses to see I’m getting on.

One week in and I test my skills against Rian, an experienced blue belt.

A big thanks to Urban Kings and Jude Samuels for letting me film.

I think I have broken my finger…

POST: I take a look at the positives of breaking a finger.

Sam catches on camera his first ever Brazilian jiu-jitsu submission! In this second episode of the BJJ in a Year challenge he talks us through his sparring with three other white belts.

POST: One month in, I take a look back on how I am getting on.

I am now seven weeks in and although I am still getting dominated by most of the other white belts, I am finally getting good enough to defeat most complete beginners. In this video there are clips from three fights, beginning with one massive guy who trains as a body builder but who has just started learning Brazilian Jiu Jitsu…

Injured… again. :-(. This time I mess up a rib meaning I can’t train for a while.

POST: Two months in, despite being off from injury I think the training is going well…

Finally back training properly. But taking it slow to begin with.

“You’ve really improved a lot”. My first compliment from our coach Jude Samuels.

At just over six months it’s time for my first tournament. The London open. I have one fight which I lose by an advantage point.

Seven months in and my second tournament, the London Open. My first win! I get three fights in total, losing two and winning one. All three went the full five minutes.

Last training session in the UK.

Arrive in Brazil for a trip of a little over a month.

The year is up! But the journey continues.

POST: What I Learnt Spending A Year Getting Beaton Up

I get promoted to blue belt by Jude Samuel at Inglorious Grapplers. 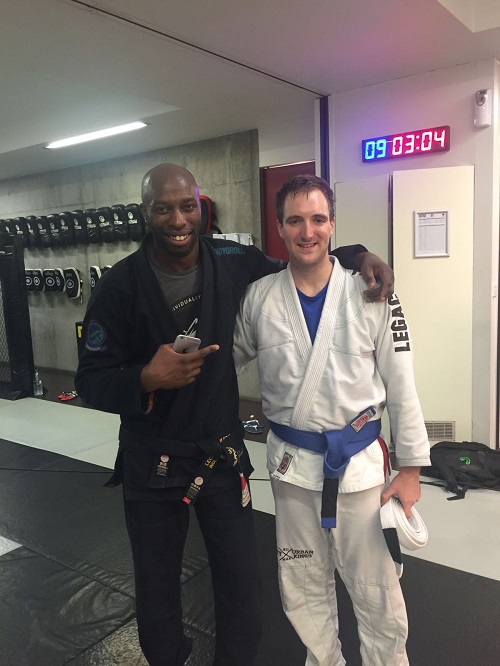 I move to Las Palmas, Gran Canaria for 6 weeks and train at Gracie Barra Las Palmas.

I move to Malta for a month and train at Arete Malta.

I move to Lisbon, Portugal for a month and train at Gracie Lisboa.

I get married and moved to Tunbridge Wells (moved for work). That is too far to continue training at Inglorious Grapplers so I move to Carlson Gracie Kent.

POST: From BJJ in a Year To BJJ in a Lifetime

Sam Priestley is a business owner with a love of learning. His experiences learning table tennis caught the public imagination and was featured on many news channels. His YouTube table tennis videos have been viewed over 8 million times. He blogs about life and business at sampriestley.com.